Time For Another Bailout 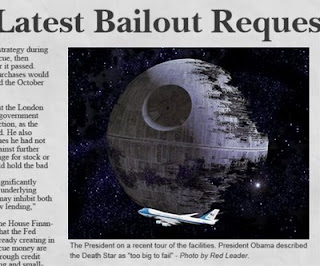 Email ThisBlogThis!Share to TwitterShare to FacebookShare to Pinterest
Labels: Bailout 2008

The Economy is an Addict, & Government Spending is the Crack

I would like to posit a theory, or perhaps make a prediction. The US will never pay off its national debt. Here's why:

Today's prevailing economic theory is that when the government spends money it grows the economy. Therefore, the government should play a significant role in making everyone more prosperous by spending lots of money. Of course, any money the government gets it must first take out of the economy through taxes. It is that feature of government spending that drives the furor over pork spending, earmarks etc. Why should my money go to fund some other state's lame pork project?

However, what's really interesting about federal spending is that they always spend more than they bring in from taxes. In other words, they run deficits. This of course drives most people even more crazy. But in reality it's done on purpose. That's right, despite all the rhetoric from all the politicians, the federal government spends more than it makes on purpose.

See, deficits mean that the government is getting and spending money it never took from you in the first place. It's basically free money. Free money which the feds use to pump up the economy, making us richer. A win-win scenario for all involved.

The catch is that the money for deficits has to come from somewhere. That somewhere is debt. It's sort of like a business taking out a line of credit with a bank. They use the available money when it's needed, and that extra cash makes it easier to expand and grow the business such that the debt is easily paid if and when it comes due.

But therein lies the problem with our national debt. As noted earlier, tax money is a deduction from the economy. If that tax money is used to pay back creditors instead of being plowed back into our economy, then the economy just got smaller. In this way we have steadily addicted ourselves to federal stimulus. Take away the spending and we'll go through withdrawal (recession). Since federal revenue relies on the strength of the economy, a recession reduces tax revenues, which, unless spending is cut, plunges us right back into deficits. Exacerbating the deficit issue further is the fact that prevailing economic wisdom is to increase government spending during recessions in order to boost the economy. Sort of like giving crack to a recovering addict.
Posted by Cameron at Friday, May 22, 2009 No comments:

Broadcast on Sunday, Mother's Day, a transcript from their website

Mother Teresa, known the world over for her great compassion, was once asked what she considered the most significant honor she had ever received. There were many to choose from, including the Nobel Peace Prize. But she surprised her questioner when she replied, “The title of Mother.”1

Email ThisBlogThis!Share to TwitterShare to FacebookShare to Pinterest
Labels: Religion

From the Daily Herald. This is the paragraph that makes it so:

It's a thrill just to get another story about James T. Kirk, Spock, Leonard "Bones" McCoy and the rest of the "original series" crew. Picard/Riker/Data, Sisko/Kira/That-Guy-Who-Sleeps-in-a-Bucket, Janeway/Big Chief First Officer/The-Borg-Chick-in-the-Spandex-Bodysuits and Capt. Dude from "Quantum Leap"/The Hot Vulcan/Was-There-Anybody-Else-on-That-Show? all have their strong points, but the classic trio and its array of supporting characters are still the "Trek" gold standard.

From economist Keith Hennessey comes a really interesting breakdown of how many uninsured people there are in the United States, and how many of those people actually need/want insurance. Since the 46 million number appears prominently in the national health care debate, this information is very valuable.

First, nearly a quarter of the 46 million are already covered by Medicaid or SCHIP, and therefore should not be included. Another 20% are not citizens of the US, while a third are either significantly over the poverty level or are young, single, and childless. If you were to take out these groups from the number of uninsured, the new number becomes 10.6 million, or 2% of the population.